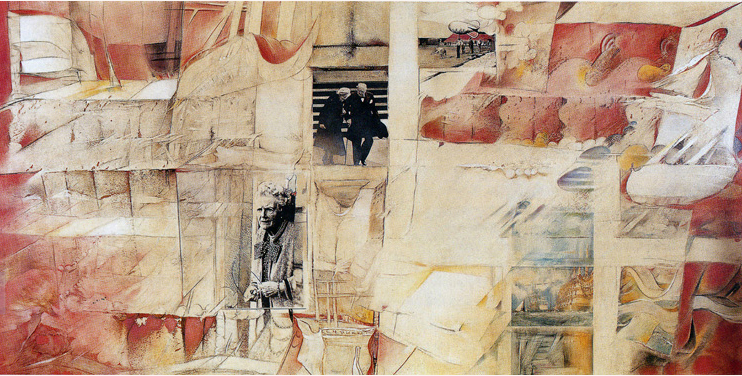 Sewall Wright, a distinguished geneticist, describes the kind of knowledge that is provided by one’s own stream of consciousness: At Any Moment this (stream) has a focus, but one which shifts continually, now on perception of the outside world, now on a memory which has some how been stored out of mind (perhaps for many decades), now an emotional state, now on a toothache, now on a construction of an abstract pattern of thought, now on communication with others, but again and again on the often painful process of choosing among courses of action, and then of acting.

I use this statement to direct my discussion of choosing and taking action in making a collage. This collage includes photographs of the aged Churchills and Turner’s watercolor, First Rate Taking on Stores. I have placed the Churchills and the Turner some distance apart because I thought that each piece needed quiet space surrounding it to be read clearly. I want to acknowledge thoughts that connect events in the photos, doing so in a way that suggests that these thoughts are being realized in a state of meditation, rather than in the shock of collision.

Mrs. Churchill’s gaze, which suggests feelings of concern and possible reverie, directs my response.  Colliding forms could conflict with the soft gradations that express my idea of “a liminal, rising awareness” intended to symbolize a meditative state. Among the experiential domains that connect the Churchill photos with the image of the Man of War is the convention that ships are usually referred to as “she.” Graceful feminine shapes and objects that are directed by, or dependent upon, males are among the roots of this metaphor. We know of Churchill’s connection to British naval history, but we are not as likely to pick up on connections among ships, the feminine and Mrs. Churchill. Here we proceed by acknowledging Whitehead’s dictum that we establish meaningful unities among diverse realizations such as ships, the feminine and Mrs. Churchill through the variety of their prehensions.  Further, the airiness and delicacy of Turner’s rendering can be linked both to an idea of the feminine, and to the intricacy of Mrs. Churchill’s garments, as well as her hair and hands.

There are other connections as well. The surprisingly high hull of the ship (to accommodate tiers of cannon) and its huge masts remind us of a technology long perished.  We may feel that both the aged Churchills and the ship are being carried away in an historic time stream. The steps in back of the Churchills make me think of the stripes worn by English seamen in the eighteenth century.  (A thought stored out of mind for years – or was it the nineteenth?)

In assessing all these ideas, however, I find them scattered.  While they can be connected, the connections are loose. Influenced by the effect of Mrs. Churchill’s gaze with its dreamy component and the airiness of Turner’s watercolor, I decide that the expressions within the ground should be loose, lightly-indicated and somewhat lyrical, with passages of waves and graded transitions of color.  Mrs. Churchill’s gaze, expressing concern, together with the aged prime minister’s failing ability, is the impetus for the gradations of white to rose – a symbol of the spreading and projection of bodily feelings such as empathy and concern.

To organize the graphic expression of the entire composition, the painting is structured by a lightly defined matrix of horizontal and vertical divisions that respond to the photo sizes. The painted passages faintly indicate sails, ship’s hulls, hands and body tissue. They overlap one another without reaching an accumulative buildup.  They fade in and out of focus within the field which, in addition to sails, ships and masts, contains vaguely-delineated waves, horizontal planes that define the steps, the surface of the ocean, and the playing field for the imperturbably English lawn bowlers seen in a small photograph near the Churchills.

The sails, hulls, hands and other forms in the painted field around the photographs, seen in context with the events illustrated there, are foci for consciousness. These forms represent not so much liter repetitions of the sails and hulls of Turner’s ship, as denotations or image-schematas, such as ship hulls that appear in different scales and perspectives.  They are constructs that extend thought beyond the forms in the photograph that initiated my response.  For example, the gradations of rose color that spread over the forms of hands, tissue and planes to the left of Mrs. Churchill form a construct that alludes to the sentience, reverie and concern that I feel are present in Mrs. Churchill’s gaze.

The eugenicist Karl Pearson has given in his writings a more refined description of the process that I am attempting to describe.  According to Pearson, immediate sense impressions form lasting impressions in the brain.  These impressions form the physical components of memory.  The synthesis of immediate sense impressions with these stored physical components leads to the formation of constructs which we “project” outside ourselves.  We call these constructs “phenomena.”  For us, such constructs constitute the real world.  It is as if the things we actually see as objects of perception are as shadows.

Sentience, airiness, the feminine attributes of ships, and the imperturbably are projections of constructs that we term “phenomena.” In this painting one can let the eye travel from one photo to another, from the rounded ship hull at the far right to the squarish hull on the lower right of Mrs. Churchill’s image.  The hulls form a set linking the notion of ships with Mrs. Churchill and Turner’s ship.  Verbal explanations can be obvious and banal.  One can let the eye lead the mind and gradually form notions, such as sentience, concern, the passage of time, and so forth.  Such constructs are based on our ability to think metaphorically and to form image-schematas to route our responses.