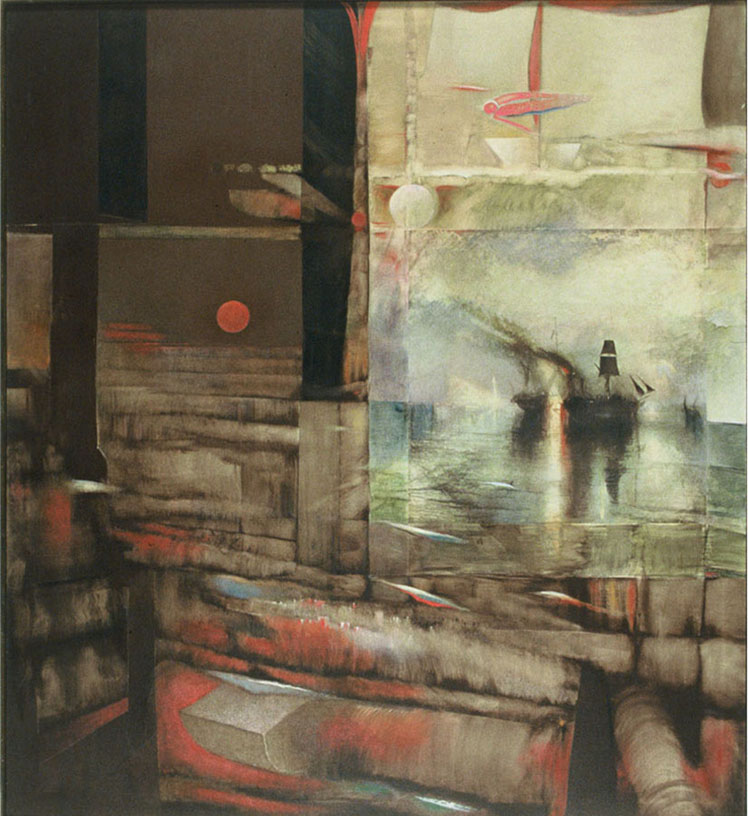 During the initial stages of perception, derivations from the painting’s data lack clear definition into subjects and objects. For example, as I take up the ship, water and sky I feel the ship’s blackness ambiguously as deadening, absorbing and repelling.  I feel a milky light in the background. The past has been lifted into the present, but without precise differentiations. I then feel an enhanced precision where symbolic transference has occurred among distinct shapes. For example,  I recognize the sharp black sails from their edges, shapes and context with the ship, and the fiery reflection in context with the ship, and the fiery reflection in context with the surrounding dark sea and the “detached” aft portion of the hull. The subtle actions of self-preservation among the actual entities “sail shapes,” “masts” and “blackness” are becoming possible. In this later phase, flashes of conceptual originality appear. For example, I feel the fiery reflection as a vertical stabilizer that anchors the ship, emphasizing its strong feeling of stasis. I also feel the beauty of the luminous, milky sky as a contrast to the inky blackness of the ship and sails. The decisive blackness of the sails with their cutting shapes feels ominous, directed toward the idea of death (a flash of conceptual originality). This direction, given by my subjective aim, preserves my various feelings of death from blackness, burial scene, stasis and “piercing” shapes of sails. The initial experience of milky white, blackness, strain feelings of the sails and the burial scene has been analyzed by my imaginative realizations of their potentialities.

Turner’s rendition of ship’s paraphernalia, both precise and vague, contains various incidents. I grasp these as an entity that stands for the “many.” At the same time the unifying, fuzzy black color field contains a multiplicity of ship details that I can read as an entity of “one.” The set “many into one” assists en to recognize a gamut of “vagueness to clarity” in Turner’s painting. This gamut can apply to objects, such as the sharp black sails, the vague intimations of ship railings and deck equipment, and to further unseen “immanent” contents of casual efficacy. The gamut allows for strong details in the foreground-ship’s hull, paddle wheel, sails that appear parallel to the picture to enforce the sense of stasis, drifting smoke and feeling of death, all recognized as actual entities- to refer to immanent possibilities. For example, the inky black circle of the paddle wheel can possibly be felt as a mysterious black sun that is setting on the horizon, a conceptual feeling that can strengthen the feelings of death and burial.

Outstanding among Turner’s contributions to painting and aesthetic is his development of the painterly expression of the set “many into one” to the point of its isolation and appreciation as a concept. This is a contribution to the growth of reason in the discipline of imaginative enjoyment. Because of the degree of abstraction that Turner reached to convey this idea, he is among the important precursors of abstract modern art. Turner also stands directly in the line of artists leading to the design concept of a complex manifold uniting many things. In The Burial of Sir David Wilkie, the encompassing field of blackness, with its suggestive gradations and incidents, expresses the diversity in the world entering into higher conceptual feelings. Of course, many great art works- for example, medieval Hindu temples, “mountains” covered with sculptures of all of life’s manifestations-powerfully express the concept of “many into one.” But what we are concerned with here is the development of the idea into a principle of abstraction. Western culture is becoming aware that harmony starts from perception issuing from the body-mind. The recognition of sets, groupings, non-Euclidean geometry, indeterminacy, the concept of immanence and other ideas from the cosmology and mathematics of Western culture are entering into our criteria of critical judgment in the discipline of imaginative enjoyment.

Burial at Sea Ships and the Feminine Gender
Scroll to top