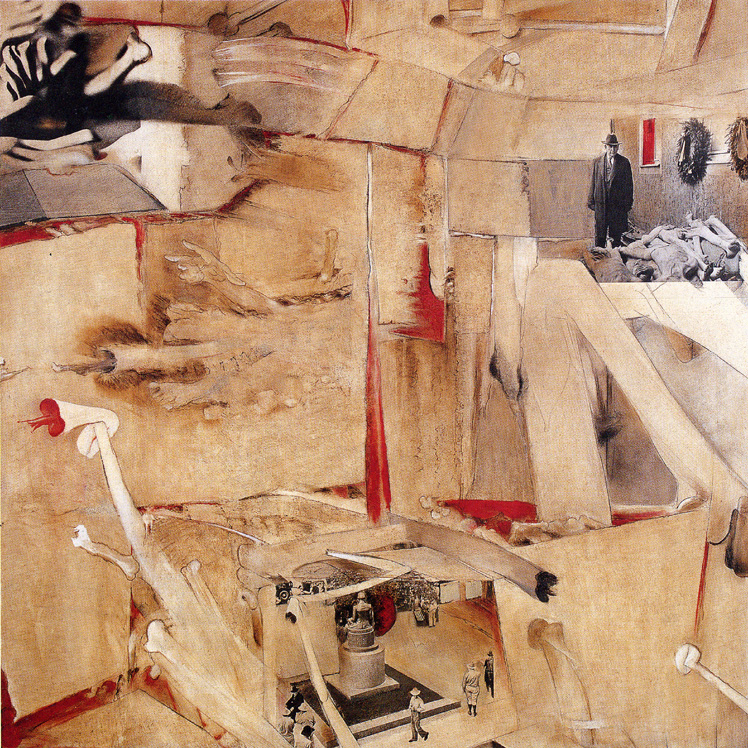 This collage shows National Archives image of Senator Barkley, mannequin fingers and a Farm Security Administration photograph of a Texas town square on a Saturday afternoon in 1939. Barkley stands over a stack of corpses at Buchenwald.  In this collage I want to call attention to the interplay of presentational immediacy and causal efficacy in the process of deriving meaning. I have painted much of the space surrounding the photographs as a surface suggesting blotched skin and dirty sheets. The skin refers to the desiccated bodies in the photograph, and the sheets refer to the dirty clothes and tarpaulins that appear between the gaunt and attenuated limbs. Outlines of limbs, mannequin fingers, tattooed number and gray, yellow, umber, black and red colors are given in presentational immediacy. My intuition is that these facts and categories will lend direction and harmony to the implosion from causal efficacy. The grayed yellow for urine, sickness and the stigmatized Star of David, the red for blood and angst, tattooed number for Nazi dehumanization, and so forth. Other feelings and thoughts derived from causal efficacy could be:  knowing that the skin of victims was sometimes stretched into lamp shades; that mannequin fingers and corpses are without feeling; and that stained sheets cover unspeakable acts.  A severed tongue is caught on a bony projection, enforcing the idea of unspeakable acts.  Blood, bones and body parts act as cues of the original data of the corpses and of the human body that necessarily qualifies perception.

More than just protection against the cold, Barkley’s layers of civilian clothing suggest to me democratic authority and something of civitas, in contrast to the ultimate degradation of the camp.  He seems numb.  His face, even at a distance, shows sadness and incredulity. The photograph of mannequin fingers suggests numbness, an eternal object consonant with feelings of numbness produced by Barkley’s expression and a presumed response to the stack of corpses. A creature-like painted arm holds a tarpaulin, as if shielding bones, bodies and the emerging photograph of a Texas town square.  This photo is a device to include feelings of the contemporaneous and disengagement, in contrast to the immediate fact of the Nazi horror. To me, it also serves as a reminder of the tribalisms, ignorances and prejudices of a world that looked away. Again, via the extensive continuum, such associations arising out of my concrescence count as objective experience in my understanding of the death camp scene.

In the photographs of Barkley and the Texas town square, there are correspondences between the isolated figure of Barkley and the solitary statue in the square. Their clothing and spatial settings support liminal feelings of authority and civitas. There is the bronze military officer and Barkley’s layered clothing, which, in black and white, appears homogenous. My positive feelings for Barkley are influenced by my knowledge of his authority as a public representative, and the humanity of his facial expression.  I include the town square primarily for its American prewar setting, and the people sitting or standing as single figures and in small groups, which allow for interpretations of insularity and disengagement.  These allusions allow my feelings about American isolationism to contrast with feelings about the Nazi camp experience.