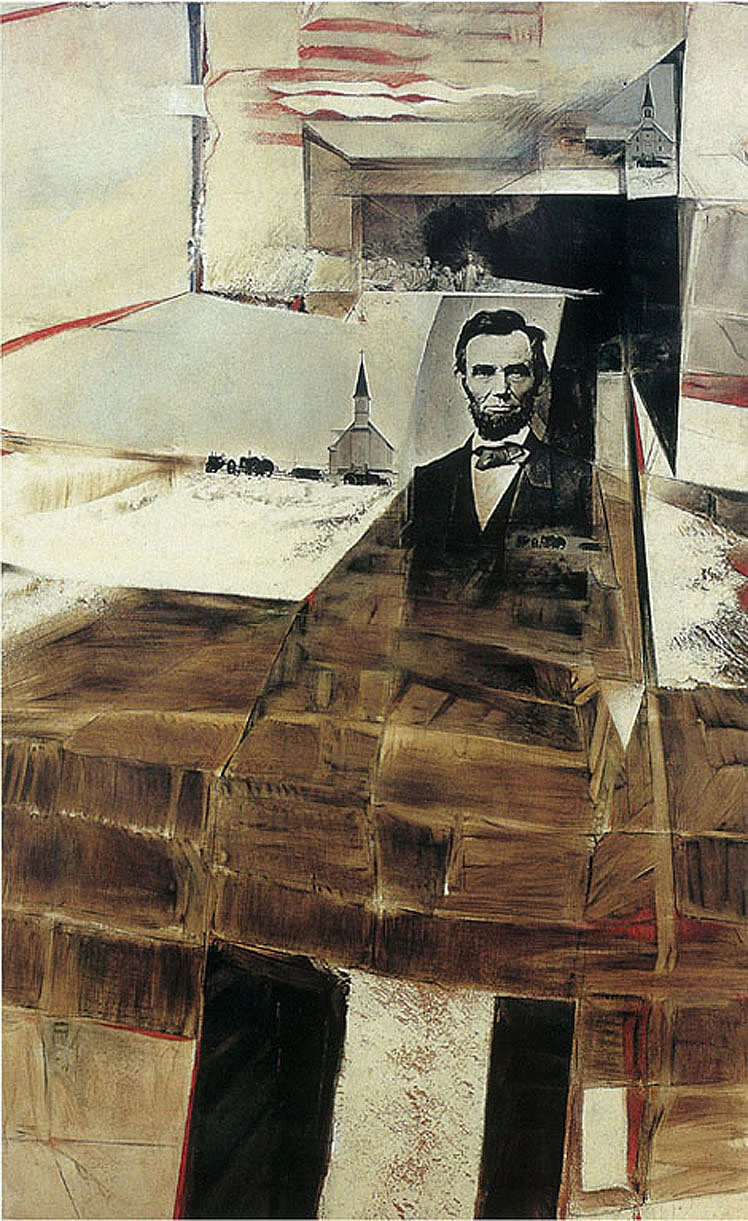 In this collage of Lincoln, a fragment of Rembrandt’s etching Christ Healing the Sick is placed in proximity to Lincoln’s face.  Lincoln was known as “Old Abe” and “Father Abraham.”  The latter sobriquet reminds us of the romance that many nineteenth-century Americans had with the Israelites and their prophets, a romance that influenced the names, dress and speech of the time.  Although Lincoln was not an orthodox Christian, his comments and speeches often alluded to the language and poetry of the Bible.  He spoke for human rights and individual worth with a voice that was pragmatic, moral, democratic and poetic.  He is known for his acts of compassion and even extreme tenderness.

Joshua Speed, Lincoln’s first friend in Springfield, who married my wife’s relative, Fanny Henning, whose brother became Lincoln’s campaign manager, gives an eye witness account:
–  Six gentlemen, I being one, Lincoln, Baker, Hardin, and others were riding along a country road.  We were strung along the road two and two together.  We were passing through a thicket of wild plum and crab-apple trees.  A violent windstorm had just occurred.   Lincoln and Hardin were behind.  There were two young birds by the roadside too young to fly…. The old bird was fluttering about and wailing as a mother ever does for her babes.  Lincoln stopped, hitched his horse, caught the birds, hunted the next and placed them in it.  The rest of us rode on to a creek, and while our horses were drinking Hardin rode up.  “Where is Lincoln?” said one.  “Oh, when I saw him last he had two little birds in his hand hunting for their nest.”  In perhaps an hour he came.  They laughed at him.  He said with much emphasis, “Gentlemen, you may laugh, but I could not have slept well tonight if I had not saved those birds.  Their cries would have rung in my ears.”

The Speed story reminds us of Lincoln’s much noted compassion.  Conceptual feelings concerning compassion and individual worth arising from facts and myths about Lincoln and Jesus can be considered as complex actual entities.  Lincoln, like the purported Jesus, spoke with wisdom and compassion for the value of the individual.  Jesus is often portrayed as being tall, bearded, long-haired, with a face both gentle and firm – characteristics that can be associated with Lincoln.  Because of my knowledge of the Speed anecdote, I form a peripheral association to St. Francis.  In none of these categories do we say that the prehensions of Lincoln, Jesus, and St. Francis are congruent.  We only say that processing certain prehensions of the three individuals can produce feelings of sympathy and historic sweep toward “a kinder, gentler nation” (to borrow from a recent political campaign) and a more compassionate world.  By recognizing interrelations among selected domains of experience, such as compassion, haircuts, rhetoric and role models, we verify the extensive continuum which, allowing for grades of value, links all actual entities and creates the solidarity of the world.

For example, consider the linkage of Jesus to Lincoln as if it were a scenario unfurling in space-time.  I think of public attributions of Jesus concerning compassion and individual worth as an influence spreading through Western history, finding expression in a frontier society that produced an Abraham Lincoln.  I think of Jesus and Lincoln as exemplars in my private, mythic version of the transmission of certain values in Western culture.  These thoughts produce a complex propositional feeling capable of self-identity with its particular role in determining satisfaction.