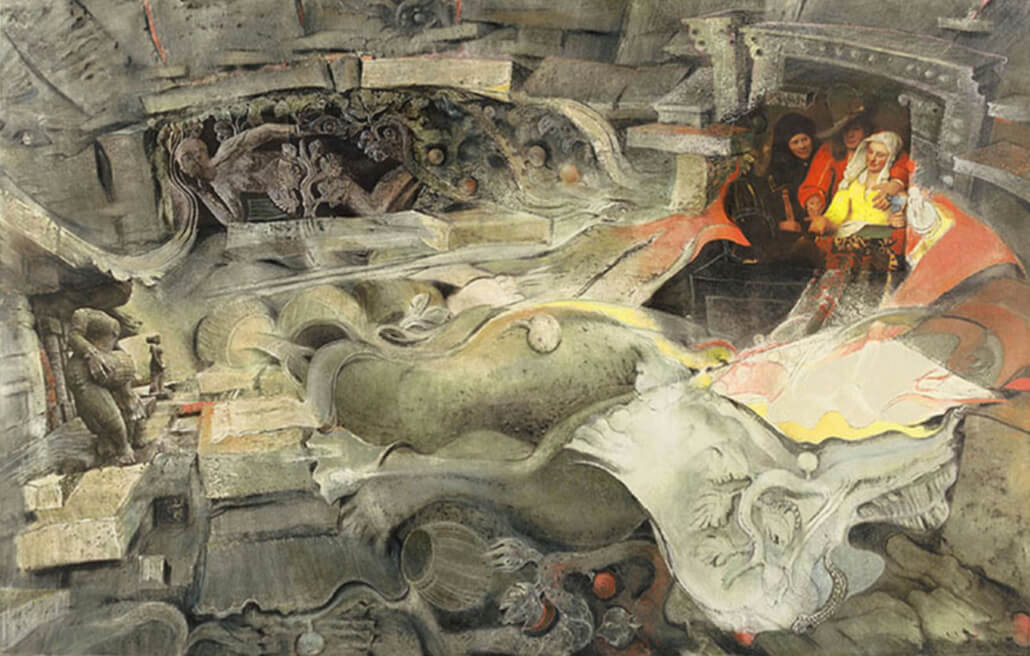 The three photographs in this collage express seminal concepts about human sexuality.  The carved stone goddesses at the far left from the Hindu temple at Konorak (about 1000 B.C.E.) display anatomy that has been modeled to represent a great swelling, a symbol of suksuma, the one stuff of the universe out of which the multitudinous diversity of all nature is differentiated.  In this work of art sex – symbolized by the full hips, breasts and sensuous curves – is a manifestation of life force integrated with cosmic energy.

On the other hand, the sculptured portrait of Eve by the Romanesque master Giselbertius, from the portal of Autun, shows the sexual conflicts that have dogged the European mind for over two thousand years.  The artist’s virtuosity is dedicated to Eve’s head, her shoulders, and the exuberant vegetation.  Eve’s hips are masked by a sinuous branch, and her hand touching her face possibly suggests a gesture of shame.

The grouping of these works allows us to study them together, looking for an integrative interpretation of the facts that they contain and for our response to these facts. Whatever we know about the cultural histories they represent, these images are masterful, dense poetic statements – sure, complete and full of life.  Through them the historic past becomes a part of a living present. By comparing them, they can help us to feel how the present has come into existence.

The main task of my composition is to suggest merging and emerging aspects of the events, in all three photographs, to form an image of a mental space-time in which aspects of the events can coexist.  The sculptures of Konorak and Giselbertius are placed in close proximity to contrast their special perspectives, and to compare their textures and forms within a single glance. The sleek form of Eve seems to move horizontally (an effect created by the camera angle), yet still retains frontal position with the picture plane. This frontal motion is contrasted with the swiftly receding perspective of the two Hindu goddesses, suggesting that they and Eve inhabit different streams of space-time. The theme of textured stone is carried over to the hand-painted stone frames around each of the three photos, leading the eye from one to the next and suggesting a unifying texture and structure for the painted ground.

Making meaning out of a perceived event, which always involves decisions that an event is this and not that, entails terrific unconscious mental activity.  I have attempted to suggest something of this process by selecting the swelling thigh of the Hindu goddess.  It is a form that seizes my attention, not only because of its more obvious connotations, but probably because I have been disposed to develop a curving mass as an organizing form in architecture, as well as in painting.  For me it has become a symbol of power, the sensual, and of non-Euclidean form.  Just below the center of the collage I made a large curving form from pieces that might be sections of the great hip and leg, or of a stone column from the background architecture, or of the stone drum placed prominently over the pubic area of the goddess.  A pubic shadow is reiterated behind the knee of the large, hand-painted leg.  This carries the eye to the dark V-shape above Eve’s knees.  The large, white rectangular form positioned to the right of the shadow is partially determined as a sheet or drapery, slipped or pulled from covering the hips.  It is an allusion to possible meanings drawn from art history that involve drapery and modesty.

Eve’s feet are hidden behind the tree and the snake. In response, feet at different scales appear prominently in twisted positions in the ground  The rhythm of feet, including the superbly formed feet of the Hindu goddess, reflect the multiple positions of hands and feet in so much Hindu sculpture, and can be associated with the multiple spatial perspectives of cubism that are suggested in the painting.  In making meaning from the data in the collage, one can only be moved by the power and flexibility of the mind in creating contexts and interpretations. I have tried to project an awareness of time, to make us think of time as an idea so that we can meditate on what in the photos might be transitory and what might be lasting in our experience.  While adequate descriptions of psychological time, as well as physical time, so far, are beyond our grasp, the aesthetic expression of both aspects of time remains a compelling objective of twentieth-century art.