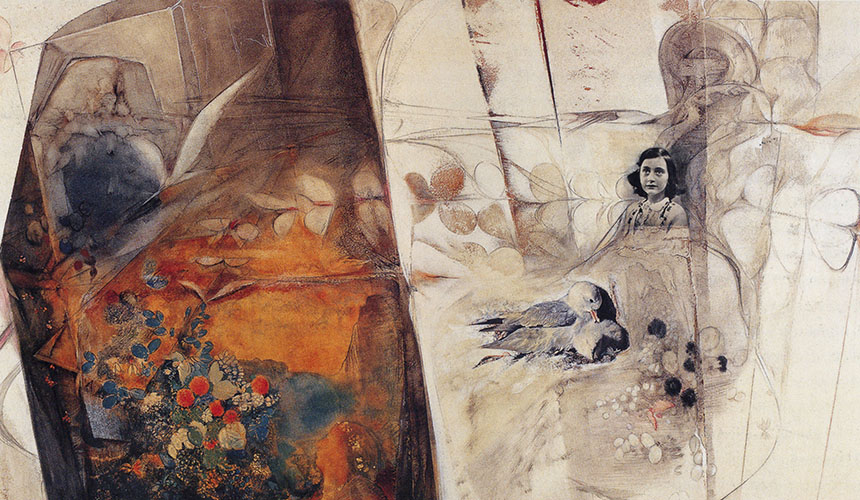 In this collage, a famous snapshot of Anne Frank is integrated with hand-drawn indications of feelings and ideas initiated by details in the photograph. These include my responses to her sensitive, uplifted face, and to her arresting and expectant gaze with its glimmer of aspiration. A prehension of morbidity in Anne’s face that can be associated with ideas about her death finds expression in the birdlike figures rising above Anne’s head that are down-turning, as if in mourning, or in the curve of her hair, which echoes the curves of birds in an adjoining photograph. I see the preening birds as a sign of caring programmed into creatures, and the evolution of that behavior into human love, which is an embodied “offstage” feature informing our interpretation of Anne. My intent is to emphasize a selection of references, and to suggest overlappings and extensions among them.  In confronting my additions, readers will, I hope, freshen the image of Anne Frank for themselves, and feel both confirmation and surprise.

The components of Anne Frank’s facial expression act as a structured society to which I attach a host of feelings – feelings about her being in the world and about her death at the hands of the Nazis. I am reminded that we carry these potentials, or ingredients of feelings, within ourselves, to be reconstituted and released by some intense coordination of their symbols that are appropriate to our immediate synthesis. This snapshot of Anne frank with her uplifted head, out-looking gaze and dark circles around her eyes, taken in an automatic photograph booth, has helped to immortalize Anne for millions. To me, the other photos taken in the same series made her look like a teenager, perhaps Jewish, perhaps impish, but without the distinctions that move me and, I presume, the editors of Life and many of their readers.

We can feel a sense of worth beyond the merely perceived events in Anne’s photo. We can enjoy this sense as an overpowering element in the realization being experienced. In my processing of the image of Anne, the immediacy of sorrow and pain is transformed into an element of triumph. This is the notion of redemption through suffering, which haunts the world. The universe is to be conceived as attaining the active self-expression of its own variety of opposites – of its own freedom and its own necessity, of its own multiplicity and its own unity, of its own imperfection and its own perfection. The opposites are elements in the nature of things, and are incorrigibly there. The concept of “God” is the way in which we understand this incredible fact – that what cannot be, yet is.