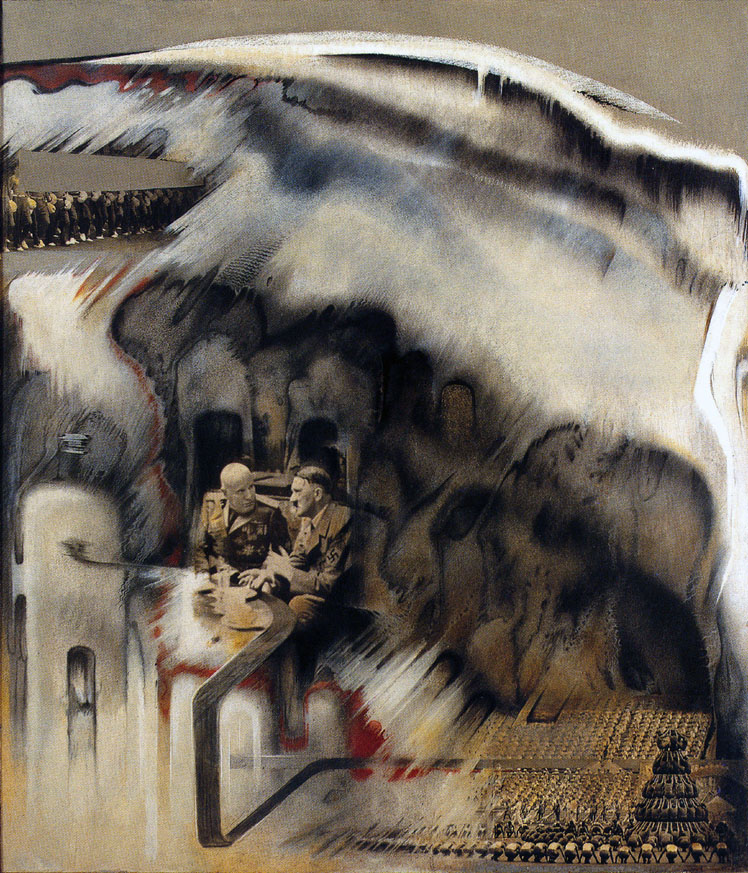 In his early study of human destructiveness, Erich Fromm makes an interesting case that Hitler was a necrophiliac.  Regardless of whether he was or not, many of us can concur with Fromm’s observation:

Hitler’s face betrayed the sniffing expression mentioned in the discussion of necrophilia, as if he were constantly smelling a bad odor; this is quite apparent from a large number of photographs… [H]is laugh was never free, but was a kind of smirk.   …[A]ll reports agree that Hitler had cold eyes, that his whole facial expression was cold, that there was an absence of any warmth or compassion.

Hitler’s obsequious and fierce face and behavior allow us to attribute to him the repellent characteristics of both worm and wolverine, which we can match from our repertoire of associations about the behavior of Nazis.  The very blandness of his face imparts something to the imagination that allows us to coordinate a group of his negative features (intense cold stare, pasty complexion, tight mouth) into greater potency.  We seize on this coordinated group of negatives to gain concentration for the build up and continuance of our negative feelings.  Yet we are all aware of how symbol-making human animals, with different experiences, strategies and aims, found positives to replace negatives in Hitler’s features, as instanced by the thousands of swooning women who adorned Hitler’s parades.

In this collage, the camera has caught Hitler in a pose that suggests both German Romantic longing and Teutonic will.  Hitler looks out, his gaze directed not toward the audience at hand, but as if toward imagined, Wagnerian heroes whose approval he seeks.  Mussolini looks taken aback, as if withdrawing from the intensity of his colleague, whose appearance allows us to confirm our ideas of him as a mystic consumed by an inner vision and inner rage.  As we experience this image, we feel a heightening of emotional intensity that is produced by a creative valuation of conceptual feelings.  According to Whitehead, a conceptual feeling combines a sense of an object’s definiteness and exclusiveness (Hitler’s cold eyes, his intensity and detachment in front of the Italian dictator) with emotional feeling (feelings of threat and fear from his lack of compassion) derived from qualitative characteristics of the object.

For example, I attempt to heighten an conceptual feeling of subjugation that I associate with Nazis, and with Hitler’s authoritarian body language and grim facial expressions.  I include a Cartier-Bresson photograph of Russian gymnasts.  The pyramid of crouched figures and the audience in uniforms produces a tableau that suggests mass subjugation and awe.  It presents a challenge for evaluation in context with the photograph of Hitler, with its possibilities of including mystic vision and ominousness into our scenarios of his power in Germany and his plan for the world.  The photo showing the piled-up gymnasts suggests subservience to the state.  The mass of figures can be associated with the burned and agonized forms around Hitler to produce ominous feelings about human suffering caused by Hitler.  Another photograph by Cartier-Bresson, upper left, shows a parade line of youthful Russian boxers.  Their white gloves suggest controlled aggression and harmonize graphically with the bald dome of Mussolini’s head.  The feet of the boxers, not quite in step, inject a note of dishevelment that can be associated with things Russian.  For example, the tails of Russian jet fighters with welds left rough because this saves money and does not interfere with aerodynamics, or scarves flailing out of heavy winter coats. A gray band makes the marching boxers faceless and harmonizes with the stadium rail.

The mind coordinates various centers in the brain that store information about scarves, shapes, colors, language, cultural codes, bodily experience, and all other sensory experience.  By enlisting the cooperation and parallel functioning of these centers, the mind arrives at efficient reconstitutions or mappings to produce meaning via subjective aim. What follows is a rough gloss of my mental processing of Hitler amid his collaged surroundings.The background forms around Hitler and Mussolini suggest torn and blackened animal and human creatures about to be either engulfed or revealed by a great wave. Black caves or, more likely because of the context of the surrounding burnt creature-like forms, black grave stones are indicated.  An ominous curving band leads from the stadium, continues around Hitler’s table, and ends as a frizzled exclamation point derived from Hitler’s mustache in the middle of a mechanical looking “dome-head.” The dome-head is my response to Mussolini’s bald pate with its curved outline, flatness and bluntness.The rounded, solid-appearing dome head with extended tongue is without eyes – a blind, screaming, stretched, creature-like form that responds to the rounded, solid boxing gloves and the mechanical feeling of the stacked gymnasts.

In designing the dome-head I am directed by Whitehead’s insight from Process and Reality “…that each fact is more than its forms and each form participates throughout the world of facts.  The definiteness of fact is due to its forms but the individual fact is a creature and creativity is the ultimate behind all forms, inexplicable by forms, and conditioned by its creatures.”