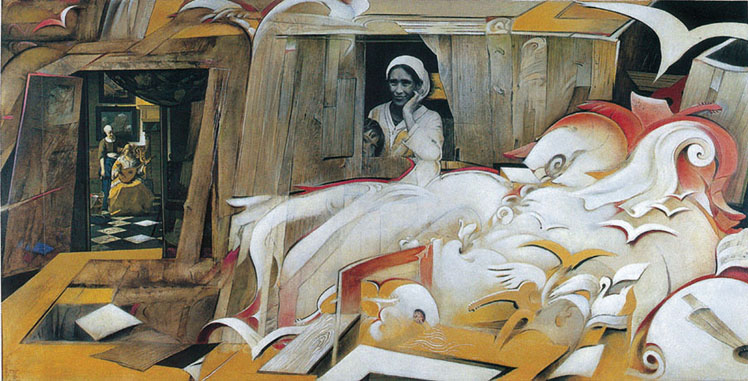 My collage detail includes a photograph by Russell Lee from the Farm Security Administration Archives.  An apparent young mother and her son look out of an opening framed by unpainted boards. Probably the most compelling quality of the photograph is the way in which it captures a moment of unselfconscious pleasure in human existence. The mild face of the mother, her body leaning lightly in graceful concordance with her head, imparts this feeling. Her face and hand are much enhanced by the arrangement of her white garments as they appear against the black window opening, and by the textures of the boards and curtain. The rough cloth of the mother’s dress, the safety pin that holds it closed and the unpainted boards, together with the mother’s expression, convey honesty and openness as well as poverty. There is a mildly lyric concentration here that reminds me of James Agee who, with photographer Walker Evans, could find poetry in the unpainted boards of Southern tenant farmers’ houses.

I have been told that the woman grew old and fat and sued the government for invasion of privacy.  Whether true o not, this brings us to another message conveyed by the picture. The boy’s eyes (which I have slightly obscured) look intently at the photographer, suggesting the candid situation of the picture.  This prehension provides a contrast to the mother’s lack of self-consciousness, but it also can make us uneasy because we sense that we are participating in an intrusion.

Intrusion is a feeling that some have recognized in looking at Vermeer’s The Love Letter, calling the incident of a maid transmitting a letter to her richly-appointed mistress contrived while placing the view in the role of a voyeur. The two shoes and the leaning broom in the foreground (which I have painted over for simplification) are considered to be fussy and a piling on of domestic incident. I find much in the picture to allay these criticisms. First, the face of the maid with pert nose and unassuming, smiling brightness, and the face of the mistress with her overlong horse-nose, and indecisive, rather mooning expression are described with the sharp characterization worth of a fine novelist.  Second, the harmony of geometric shapes, the contrasts of spatial depth and flatness, and the colors and tonalities are controlled, complex and compelling. The two shoes repeat the rhythm of pairs of pictures on the wall, ladies and floor tiles – like an orchestration by Mozart – to override any excessive storytelling set up by the object and furnishings in the room. Further, the women framed by the doorway can read as being in a private volume, actually protected by the barriers of shoes and broom in the doorway, which suppress the sense of intrusion.  Finally, the frontal perspective as viewed through the foreground doorway could only have been realized by a master. The placement of the mistress at near center of the picture is the kind of optical puzzle with which Vermeer sometimes challenged himself, as, for example, with the abrupt and surprising back of the artist that occurs in the celebrated Artist in His Studio.  While The Love Letter may not move us with the sense of love and the continuity of life found in Woman Holding a Balance, it is a fascinating masterpiece, and it conveys with the reserve and detachment peculiar to Vermeer a sense of good feeling about human existence.  The quality of light that he creates as it falls on garments, laundry and lute, and his tensioned yet calm and balanced harmonies are outstanding.

In my collage, the most obvious analogies between the photograph and the Vermeer are that each image shows a sympathetic human pair, prominent white garments, and rectangles that suggest rooms. There is a drapery at the upper right of each image. There is a sense of well-being in each picture. The bright yellow and white costume of Vermeer’s lady projects joy, and sets off her lute with its implications of play, spirit, pleasure and, as I have been educated by art historians to believe, sex. Among the visual releasers that encourage the viewer to draw analogies between the Vermeer and the photograph are the white head wraps of the maid and the mother.  The curved, soft yet crisp and arresting shapes of the wraps encourage us to seek other analogies, such as the affinities of texture between the shirts worn by the maid and mother, and the contrasts of the architecture surrounding the two pairs, which in each case presents an archetype of its class.

The principal addition I have made is the passage of white and yellow forms extending across the bottom and up the right side of the picture signifying the mind playing with ideas.  This passage extends to the viewer’s left to become a vague but recognizable “hand” or “fingers,” designed as if to pull back the draperies and boards to reveal that picture and its implications. The passage as a whole is let purposefully vague, allowing the viewer to find denotative figures and shapes derived from other events in the two pictures. Wholes and parts of simplified lutes appear at various positions and scales.  There are suggestions of bodily forms, sensual curves and birds, all seemingly arising out of garments, laundry and draperies. A piece of a rectangular frame obtrudes, colored rose, white and yellow.  The rose color refers to blood, arousal and bodily tissue, while the yellow and white, in direct response to the lady’s costume, signifies good feeling and, in context, seems consonant with the implicit enjoyment of music.  White also suggests purity. The larger, rose-colored forms at far right hint at creatures, wing tips, fingers and sexual parts. The passage containing these indications suggests metaphors of extension, aspiration and bodily mass. As in other collages in this presentation, expression of the ideas of femininity and sex as facts of embodied sensuality and of natural necessity is intended.  The mind can thus include the subject of sex in an expression of spirit by associating symbols of sex with forms that rise and project a sense of aspiration, differentiation and unification in mental processing, images of bird flight, music, balanced proportions and other cues.