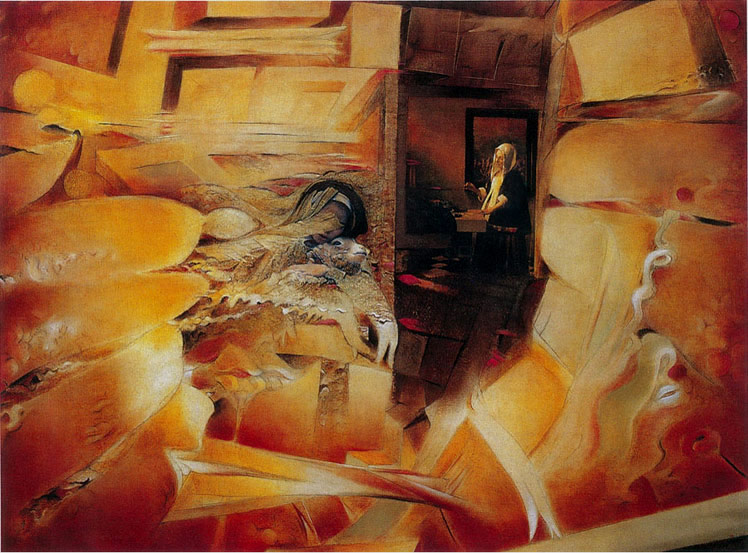 This collage combines a photograph of a Peruvian girl holding a sheep (from National Geographic) with a print of Vermeer’s Woman Holding a Balance.  My intent here is not to show that there are details found in one picture that are perfectly congruent with details in the other, but to suggest that making approximations and correspondences among things that we see, what Whitehead calls “events,” are at the basis of the mind’s ability to create meaning.

Both pictures contain human figures that appear to project thoughts onto objects held within their grasp. Both pictures depict garments, gestures of envelopment, and signs of sentience. We perceive these similarities and treat them with “fuzzy logic” to create associations and identities. This process enables us to compare the feelings of the “preciousness of life” that are communicated by each photo. Fuzzy logic, a term coined by computer technologists, is used in voice recognition and other computer programs that sort out similarities within variable data. It is related to the logic we probably use for most of our mental transactions, including the sorting of consistencies and inconsistencies among the disparate objects in collage.

The photograph of the Peruvian girl, described in National Geographic as

“poetic,” is distinguished, above all, by the sheep  It confronts us with feelings of the austere that help to dispel the sentimentality and cuteness that we might associate with a girl hugging a lamb. These feelings can be attributed to the surprising position of the sheep’s head and prominent eye. The sheep seems to reluctantly accept the pressure of the girl’s embrace, but its head, with our prehensions of its upward-thrusting, yearning inflection away from the girl, signals that it does not return her address. The sheep’s eye – large, black and indicative of small intelligence – reinforces a feeling of distancing from the girl, and contributes to what is, for me, a feeling of austerity.  This effect contrasts with the engagement and “love” that we read into the girl’s embrace.

The girl, who seems to be both singing and musing as she embraces the sheep, seems centered in her own well-being. Vermeer’s woman seems similarly centered. Her serene face provides us with not so much an overbearing warning about vanity – as art historians who focus on the scales, the painting of the Last Judgment behind the woman, and the seventeenth-century penchant for allegory usually attest — but with a sense of comfort and reassurance. We are reminded not of the constraints of life, but of its preciousness. This sense of preciousness has correspondences with the sense of comfort and empathy projected by the girl hugging the sheep.

Vermeer’s precise geometry, evident in the placement of the hand holding the balance at the corner of the picture frame and the leaning, rising, stable pyramid of the woman’s figure, creates a sense of physical balance that acts in the collage as a counterpoint to the thrusting sheep. This harmony, and the others I have mentioned, can encourage us to meld aspects of the two situations.  These harmonies can lift us to aesthetic and contemplative references, and possibly to Whitehead’s notion that meaning resides in the co-dependency and relationships of all things in a world that is derived from a common past. This means that notions of comfort, embodied tactile understanding, geometric relationships, and other qualities inherent in realizations such as the wooly sheep and the fur trimmed jacket, are derived form in-some-way similar experiences in the space-time continuum that are common to events in both the sheep-girl and Vermeer’s woman.  Whitehead gives the term “eternal objects” to similar aspects of experiences that are recognized and used by the mind to negotiate consistencies among the diversity of perceptual forms, such as a white flower and a white wedding dress, or the tactile softness of sheep’s wool and the fur-trimmed jacket worn by Vermeer’s woman.  These qualities are not literally eternal, but Whitehead retains the term as a deference to the language of traditional philosophy.  More detailed explanations are presented in Part Two.

In response to the hidden hand in the woman’s head cover and the prominent hands of both the woman and the girl, I designed large finger forms to frame, touch and reach out to the girl with the sheep and to the Vermeer.  At first glance, one can see that the woman is pregnant.  Below the two photos a tubular form connects the two sets of enfiladed fingers.  An “umbilical cord” rises vertically at right.  Tints of pink and rose accent the “organic” forms as signs of physiology and the sensual. To signify touching wool, “wooly” forms emerge from the fingers at the left.

Bernard Berenson, the famed expert on painting of the Italian Renaissance, placed the enhancement of tactile values among the primary aims of art.  Among the imaginary motor sensations that we experience when we participate in the space, depth and distance in a picture, he would include our implicit urge to reach out and touch the wooly sheep or the fur-trimmed wrap.  The sense of touch is the basis for our understanding of the substance and character of the world, and contributes to our sense of well-being.  Most of us are familiar with how vital touching is to the development of human infants and to the young of other mammals.

The knowledge of touch, as distinct from the sense of touch, is given expression by the major finger touching a large embryonic eye shape. This finger links touch to vision and symbolizes an embodied synaesthetic connection that I am attempting to illuminate. Light, indicated by a yellow wash, extends from a pale disc, which could be a sun, at upper left, following the same direction taken by the light in the Vermeer.

The Renaissance philosopher Bernardino Telesio believed that to touch physical matter and to grasp the physical substrate of matter through the imagination was the basis for attaining knowledge of nature.  For Telesio, touch is the primary sense; it forms the basis for sight, thermesthesia, and all the other senses. The intellect is only a mediate and derivative “sense.” It remains necessarily imperfect, in that it presents only an analog or simile of the impression. It is these functions of touch that I attempt to suggest in the symbol of the painted fingers.

The symbol of the over scaled fingers can take on other meanings.  In context with Vermeer’s hidden hand, the fingers can be “godlike,” as if a greater presence, being or spirit were presenting the events in the photographs. In the context of appropriating meaning from the events in the collage, my painted fingers can be metaphors for the viewer’s intention to approach the sheep and the pregnant woman as if to understand their implications. Light, and the act of touching itself, are woven into the symbolism of the fingers. There is also a suggestion that other fingers are of a mental order, because thy are lacking in realism, as if they are largely denotative and not literally corporeal.

I have covered the girl’s eyes with a veil extending from the background. Her eyes seemed too ordinary in contrast to the importance of the sheep’s eye, and in this version they distracted from the immediacy and feelings of a certain dignity that we project into the image of the sheep’s head. The veil, a piece of the ground shaped like a cloth with a hand-like appendage, slopes up to approach, touch, comfort and attach the girl’s hair to the painted forms within the ground. This gesture reinforces the theme of touching, as well as serving to shield the girl’s eyes. The painted background forms in this collage allude to the physical as well as to the spiritual. The allusion is to the mental continuum as conditioned by our bodily and mental life, and to a creaturehood and Eros to which we are irrevocably tied.