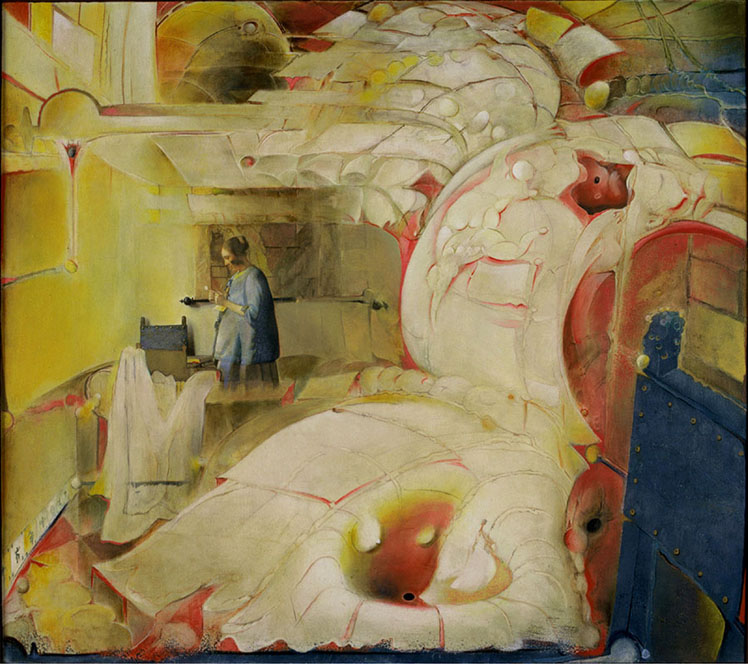 By repeating a few words, Gertrude Stein’s famous line, “A rose is a rose is a rose,” illustrates a modern predilection to minimize description in literature.  The reader is encouraged to fill in appropriately placed outlines, or what I will call “denotative forms,” with meaning.  All poetry depends on this device, when words are considered as a collage of denotative outlines whose contents, drawn from myriads of information bits and connection neurons, are linked to the colors, smells, delicacy, freshness and wilt of roses, and brought together in the mind by utilizing pre-organized reference frames.  Shakespeare’s line, Tomorrow and tomorrow and tomorrow creeps in this petty pace from day to day, to the last syllable of recorded time,” contains little description, and yet it is deeply evocative of Western reference frames about time, destiny and the futility in human affairs.

To give meaning to the examples cited above we seize on certain prehensions initiated by the words themselves and by their order.  Prehension is, we remember, Whitehead’s term for the first elements in sense reception to which we respond as we take up details of an object of perception in order to produce thoughts and feelings about it.  In Stein’s line, the words “a rose is a rose is a rose” may be grasped as a syllabic and euphonious construction in which the word “rose” becomes the longest emphasis.  The rose becomes an object of contemplation.  Connotations of a rose may or may not arise, but it is as if, in each repetition of the word “rose,” we understand, by a modern interpretation of consciousness, that instead of conventional repetition there is some implied difference to savor.  In order to understand Stein’s intention it helps to be familiar with certain tenets.  One was her belief that, after hundreds of years of sometimes marvelous descriptive English writing, the old adjectives and subject-predicate word order had become expected, familiar, and had lost immediacy and conviction.  Another was the psychological emphasis on the interior life that shifted interest to the subjective response.  Both artist and audience were seeking new ways of interpretation and participation in the world informed by this sensibility of subjectivity – a kind of “re-membering” of the world, to borrow Carl Frankel’s recent phrase for the recovery of subjective values in sustainable economic development rather than limiting ourselves to “objective, materialist, cash-driven values.”  Finally, a new cosmology based on scientific relativity and other factors affected the ordering of events.  This change was reflected by a parallel change in art, in which homogeneous perspective gave way to multidirectional and nonlinear presentations such as the “stream of consciousness.”

In my collage of paintings, I signify thoughts issuing from cognitive and contemplative processes by showing a sampling of denotative forms that have been derived from the photographed events included in the collage, as well as from the resources and limits of my imagination.  I utilize simplified outlines of a pearl, chair or breast in the painted ground.  The denotative forms in the ground with their implied instructions are derived from my reflections on the form’s inflections and context. This process directs attention to ideas and meanings alluded to in the photographed events in the collage.  For instance, in the collage “Plato’s Receptacle” with Vermeer’s Woman Reading a Letter, the most prominent form within the ground is the twisting, off-white shape that is segmented into roughly defined, flowing rectangles.  The flowing rectangles relate to the shapes of the letter, map, book and chair in the Vermeer, as if these forms were among the ingredients and modulators of the off-white shape.  These progressions are intended to form a denotative visual metaphor of activity in the mental continuum in which the mind transfers relevant information from one idea to another.

For instance, we know that Vermeer’s woman is pregnant contemporaneously with anything else that we know about her.  In an attempt to suggest the activity involved in the awareness of this fact, I place a Nilsson photograph of a human fetus at upper right.  The part of the background symbolizing the mental continuum in which the fetus is included should express the non-Euclidean world that seems relevant to our current understanding of geometry and the organic process of change.  For harmony, the background representation should also appear to accommodate the shapes of the globe, book, table, map, fetus, woman and letter that are found elsewhere in the collage.

The denotative form is used to call attention to a thing so that the thing may take on two roles alternatively.  It may take on the role of an object that can initiate creative action, or of a subject that initiates thoughts and feelings about how that subject arises from knowledge of the world.  For example, the ghostly rug descending from the table can be considered to be denotative; it may be thought of as an object; one of the furnishings to complete the sense of the room in Vermeer’s original painting.  The rug may also be thought of as a subject, a reminder of how latent ideas about the rug arise from the world – for example, how the rug’s vertical thrust harmonizes with and continues the vertical thrust of the standing woman, or how the rug, like the map, could be a symbol of Dutch trade.  Other forms in the painting that I have designed to act denotatively and which, according to Whitehead, can fluctuate in meaning as either object or subject, are the simplified pattern of a window at the upper left, the globe-sun that is located next to the window, which is a response to the map and to the sunlight of Vermeer, and the oversized chair in Vermeer’s original painting.  The large chair adds a sense of depth to the collage by contrasting with the smaller scale of the woman.

The woman glows in light.  Her beauty and bloom, enhanced by her advanced pregnancy and her lips (splayed-back to an unnatural degree in a sign of breathy sentience), convey a subtle eroticism.  In context with other messages in the painting – the uncanny verisimilitude given by Vermeer’s precision in rendering light moving across the wall, the map, the sense of wholeness of a world ordered by benign cause and effect, the coolness of color and the sense of aesthetic distance – the erotic is downplayed, and yet it is unmistakable. Its deeply felt presence inhabits the sanctity of Vermeer’s mise-en-scene to become what I would call an expression of sexual fulfillment as natura naturans.  The subtlety and power of Vermeer’s achievement here is probably unique in Western Art.

aesthetic expressions of a “receptacle.” In the Milliard and Freeman house (shown at right) located in Hollywood, California, Wright creates a manifold out of small, sculpted, concrete blocks that form the space of the house, giving a powerful sense of the many becoming unified in one. The diverse features of piers, soffits, walls, borders to wood floors, and beams of these Wright houses are all defined by the intricate blocks, some solid and some perforated, in which Wright’s  many harmonized applications illustrate adaptation for the attainment of ends. The expression of continuity that unifies all the differentiations of form is one such end. In the Milliard exterior, the delicate, sparkling texture and the vertical lines of the patterned blocks are in harmony with the scale, light, shadow and verticality of the surrounding vegetation.

The mass of the house, which could be obdurate and off-putting if plain surfaced, instead feels scintillating and life-enhancing. Both here and in the Freeman interior, the purpose and meaning of the “manifold-receptacle” seems evident. The device fosters a conceptual feeling of order capable of entering into the superject conditioning our response. For example, we can be reminded to the reference frames of immanence, continuity and change-primary tenets of organic theory that Wright so often expounded along with relationship to the site and the expression of materials. In the interior of the house we experience the ordering of contrasts of light that stimulate our innermost nerve, from pin-pricks of the free yet ordered small preferations to the expanse of the visually free, mitred-glass corners of the room. The feeling of mastery in Wright’s expression of the manifold and of light is so mingled with the enjoyment of scale, texture, space and notions of dwelling as if in a protected cave opening out to free vistas, and of resonances with a past that includes pre-Columbian references, that when one experiences the house the house there is a richness, indeed, a magnificence of ordering which strengthens these enjoyments.