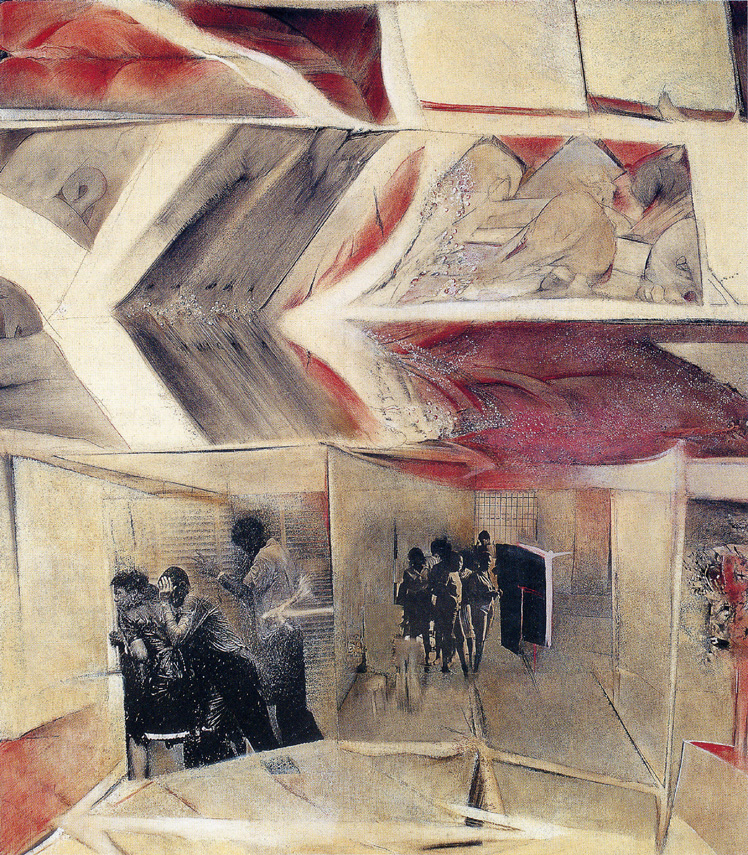 This collage shows images of police “control” civil rights demonstrators in Birmingham, Alabama.  The photograph at left, by Life Magazine photographer Charles Moore, has become world famous.  At right, another outstanding photograph by Danny Lyon shows young women protesters in a Southern jail.  There are suggestions in the photograph of rebelliousness in the girls who face us while clutching jail bars. To the rear, girls with faces turning away suggest the demure. One feels the arresting composition of the Moore photograph with its orchestration of physical force, determined resistance, pain and moral power. The rhythm and context of the figures – the woman with stiffened resistance and determined look, the man in the middle with hand silhouetted against his head, and the tall man bent by the water blast – provide a gamut of harmonized contrasts. This orchestration of resistance and bending is among the metaphors of the body collaged with my notions of justice, morality and suspicions of a prejudiced majority. According to Lakoff and Johnson, much of our moral sense comes, via conceptual metaphor, from a broad range of experiential domains – religious, aesthetic, social, political and bodily.  It is no surprise that we experience vivid moral feelings and judgments from the photographs above, whose details and aesthetic potency encourage our participation.

In the above example, my physical feelings are involved in conceptual feelings of physical force, bodily and mental resistance and wetness. Among my conceptual feelings, I notice associations of the tall African-American with stately, noble Watusi that I have seen in films. The jewelry, watches and woman’s slip assist me to gain stable symbols, enabling me to return to my evanescent concrescences of moral right and that these demonstrators are effective American citizens.  Moral ideas are developed over a lifetime t become deeply involved with our sense of self=worth, religious and ethical values, and communal life.  They are often weakened by rote use and self-serving manipulation. In this photograph, the shock, power, efficacy of the harmonized subjects, visual patterns and rhythms can initiate an abrupt and intense realization of one’s moral feelings.

At the top left of the collage appear images of lips or a cut, colored pink and rose with gray and black.  These images represent bodily tissue found on the insides of lips or of a wound, and something of the fullness of certain African-American lips.  Below the lip references, a large, stretched white form – a response to the tallest man – is shaped rather like the letter Y. The Y is a visual pun implying a rhetorical question, as if to ask, “Why is this event happening?” As I have alluded above, the concentrated orchestral efficiency of the details in the photograph contributes to an accumulating sense of visual and moral veracity.  There is a fusion of mathematic pattern in the rhythms and gradations of black and white color with the concrescences of subjects, such as bigotry, force, resistance, bodily and mental pain, civil disobedience, wetness, hoses and police.  The pattern focuses the viewer’s attention and encourages the viewer to impose a synthesized order on the variety, content and feeling of the subjects.