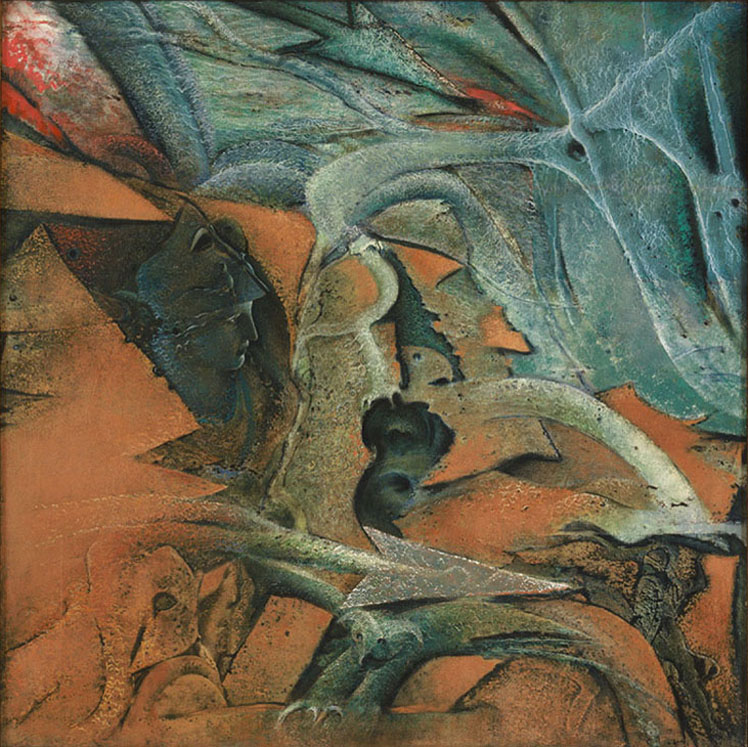 In this collage, very disjunctive objects are shown at different scales. At the upper right is an electron photograph of brain tissue by Lennart Nilsson. At the center is a hand-drawn helmet image formed by plates fracturing, revealing a fearful and possibly mindless creature underneath. In this image I am attempting to suggest that the creature inhabits the inner recesses of the brain, the limbic system where the most primitive feelings of fear are initiated. A spear, upper center, that could be read as thrown by Athena, is poised to strike the most visually significant area of brain tissue, keying into the idea of self-destruction. Initial primitive feelings include strain responses to the thrust and piercing angles of Athena’s helmet, as well as surprise and a strange unfamiliarity upon viewing the fibrous forms of the neuron arms and the helmeted creature. The fibrous, dendrite-like tissue enveloping the neuron arms adds an intricacy without familiar scale. The notion of scale arises as a conceptual feeling that may be processed a number of ways, in context with the head of Athena. For example, I see it as a symbol of the vast, scaleless universe eliciting a component of awe. It may also signify that in the labyrinthian intricacy of the brain of Athena are instructions for the destruction of the race.

The nerve-like texture, the red touches and the recognition of brain tissue serve as reminders of the physiological aspects of the body, and the body itself as a reference frame. The fearful face under the fractured helmet personifies war. It represents a projection of fear, and the animal-human ambiguity indicated by the spear-carrying Greek warrior at lower left. To simplify the image, I reluctantly painted out an even larger spear-throwing warrior with a literal ram’s head, which would have made the animal-human duality even stronger. These feelings of fear and animality-suggesting deep-seated mechanisms form which we are unable to escape-conform to my original grasp of the datum that is governed by a superject in which fear, aggression and self-destruction are retained to be contrasted with the sensitivity and intelligence of Athena.