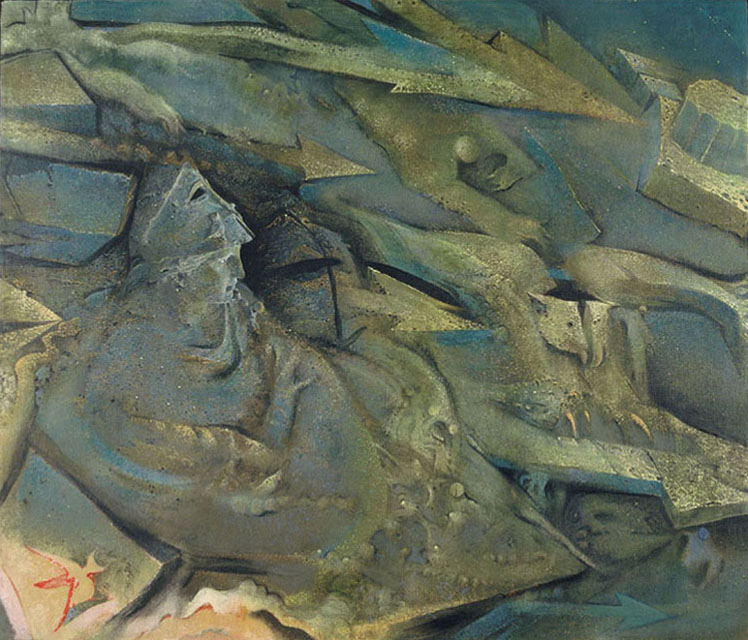 The first time I saw the Athena profile included in my collage I sensed references to pronounced human intelligence and sensitivity, freedom, constraint, stony texture, aggressiveness and death.  I felt that I was witness to a rare coordination of signs and symbols provided by the artist, the light and perspective introduced by the photographer, and by the changing circumstances of time and mind.  The profile view emphasizes the forward thrust of the helmeted head and the streaming direction of Athena’s free-flowing hair.  Her eye lacks volition, allowing her to be seen as a symbol of the race unable to choose and driven inexorably towards war.  The thrusting geometry of the helmet and face also allow us to prehend feelings of Athena being driven by forces beyond her control.  The textured patina suggests an astral substance and scale, as well as weathered bronze or stone.

In context with prehensions of aggressiveness, lack of volition and death, I can infer that the impulse toward war is programmed into the stuff of the universe.  I cannot imagine a frontal view of this sculpture making such an impact.  Thus photographs of art allow us to find and select those compelling details that seem essential to our understanding and satisfaction.  We are able to layer meanings that we might find through memories of photographs of stars and galaxies, our knowledge of testosterone and male domination over women in the light of twentieth-century feminism, and so on.  The “astral” texture, which may not have been present in the original sculpture or in the artist’s idea, together with the photographer’s focus on the sensitive profile and thrusting helmet, both enlarge and restrict the references available for our interpretation.

The struggle between the intelligent and sensitive woman and the death-seeking warrior has its roots in the displacement of the Goddess of Neolithic times by the aggressive, male dominated Gods of Bronze Age Greece.  The feelings projected in the images of Athena are based on, perhaps, unconscious memories of the transformation of the Goddess culture of nurture, wisdom and partnership between men and women into male-dominated, warlike cultures, of which we are the heirs.  While some scholars dispute the “displacement hypothesis,” Riane Eisler is among those who affirm it.  She cites recent archaeological evidence that suggests developed and peaceable Neolithic cultures existed for several thousand years in southern Europe and around the Mediterranean.  War-based societies gradually replaced these cultures between 4,000 and 1300 B.C.E.  Eisler shows how she (Athena) retained her ancient emblem of the serpent, which symbolized wisdom, while she began to appear with helmet and spear, and with her chalice replaced by a shield.  If we examine our direct, felt response to the actual cues in the image we can recognize this dichotomy.

A war helmet rides just possibly a little high over Athena’s bountiful, free-flowing hair.  If the goddess were only supposed to represent war, I would expect the helmet to be lower to her brow.  To me, this positioning, in context with her flowing hair and my strong prehension that she is a symbol of intelligence, can suggest the possibility that she is uneasy with the warrior’s role.  Athena’s eye, fixed in an impersonal stare, indicates her lack of control.  These feelings are heightened by the angular, aggressive looking helmet, which frames the black abyss of the eye aperture to combine feelings of aggression and the ominous.  There is deep irony in the contrasts of the eye-abyss –to me, a symbol of death – with life’s possibilities expressed by Athena’s intelligent profile and streaming hair.  The confluence of cues in this superb head of the goddess conveys the idea that in spite of the sensitivity and mental power exhibited by the race, mankind is driven by the impulses of war.

My first idea in designing the collage was to make a thrusting horizontal composition of lines and forms that emphasize the horizontal direction to convey my notion of “Athena being driven.”  A rush of spears becoming slabs of what look vaguely like weathered stones reinforce this horizontal theme.  The base of a stony column, with its connotations of Greek architecture and a ruin, also suggests the fibrous tissue seen in photos of the brain taken with electron microscopes.  My intention is that this “stony-tissue-column base” should act as a symbol of such notions forming within the mind.  A prominent yet vague image of a stony raptor is positioned at center-right.  Perhaps it is an owl, connoting wisdom – an allusion to the wisdom of Athena.  It pronounces on, or rides a spear-like “stony” slab.  The bird is touched by the hand of an ideogram of a man at center-top.  The man is reaching for and following the bird.  Both bird and man are ambiguous – not clear like the head of Athena – but distinct enough to be grasped by the roving eye.  The reference is to man aspiring to the predatory bird, which takes its prey with strength, speed and the advantage of flight.  This theme is a response to the falcons on Athena’s helmet.  While one can read these particular falcons as pert, alert, and with possible tinges of humor, my closures of war, death, gravity and irony overpower such light-hearted readings as I map into my experience of war helmets throughout history that have been adorned with birds of prey.

To the lower right of the body of Athena is a large prong-like form with references to both helmet and spear.  It is linked to Athena by a continuous band of writhing, cartoonish forms that suggest heads, arms and hands extending up the prong as if emerging from the ground.  This cluster of body images is a conscious reference to Gericault’s Raft of the Medusa.  The possibly human figures ride the prong-like doomed survivors on a raft heading for destruction.  Among the less visible images are a serpent to the lower left of Athena’s left shoulder, a shield between the left and right arms of the man following the raptor, and vaguely terrified face which I see as a consciously made symbol of unconscious fear, to the right of the prong.  Next to Athena’s profile there is an image of a helmet that is perhaps more of Nordic origin than of Greek.  As Whitehead points out, the first task of conscious perception is to recognize an object as being this rather than that, which is also the basis for the figure-ground duality of perception stressed by Lakoff and Johnson.  I have selected the “Nordic” or “other” helmet to express this aspect of perception, as well as to provide a modified repetition of Athena’s fiercely aggressive armor.  What I am trying to accomplish in making an image of mind is to express our mentally “free” coordination of events in extensive space-time.  During my perception of Athena, I take up a selection of cues such as the eye abyss in the helmet, thrusting geometry, and the “astral” texture of the bronze.  In so doing, I try to image various contrasts, identities, associations and feelings, and the modeling of ideas such as that Athena appears to be “driven to destruction, “ and present them as if they were emerging from a fluctuating yet continuous ground.  In this way I attempt to symbolize the appropriation of meaning from references to other even-situations in space-time during the mental process.  The process is dependent on what Whitehead calls the “extensive continuum,” a concept that allows us to differentiate all perceived pieces of information in the universe and to make meaning from our combinations of their aspects by means of prehensions.  Perhaps this sounds too ambitious for anyone to attempt and yet, inevitably, everybody does it.  Advertisers who created the Energizer bunny, artists who work in collage, the jokes of comedians, and even teenagers who use terms such as “spaced-out” are examples.  The term “spaced-out” is an example of collage thinking – in this instance a colorful and efficient way of saying that an individual’s mind is way out in spaces and not attached to the body as a container in the here and now.  The image, which juxtaposes space and the individual, has undoubtedly been informed by a background of popularized space exploration and demonstrates the human ability to create metaphors with ease and move them fluidly from one context to another.  Gertrude Stein, in her lecture Composition as Explanation, delivered at Oxford in 1926, described how everyone is involved in expressing the composition of their time.

According to Stein, who collaged words more masterfully than perhaps any other modern writer in her book of 1914, Tender Buttons, it would be no coincidence that in 1979, Bateson would state that in every current of causation in our biology, physiology, thinking, neural process, and in the ecological and cultural systems of which we are parts – each circuit in each current conceals or proposes paradoxes and confusions that accompany errors and distortions.  Such activity is endemic to nature’s efforts to make appropriate transfers of information.  This is the situation that underlies the process that is central to thought and evolution:  two or more pieces of information or command working together or in opposition.

Collage thinking, or the controlled collision of ostensibly unrelated pieces of information to produce new meaning, has become possibly the most creative and energizing force affecting the composition of art and thought in our era.  If true, this proposition would be a verification of Stein’s insight that certain artists and, possibly, some of today’s teenagers are merely the advance guard in expressing the composition of their time.  Whitehead’s postulates, which are based on a reunification of the body and mind, matter as energy and the origin of feeling, and the fluctuation between the objective and subjective, allow us to examine expressions such as “spaced-out” as transfers of information into a concrete reality.