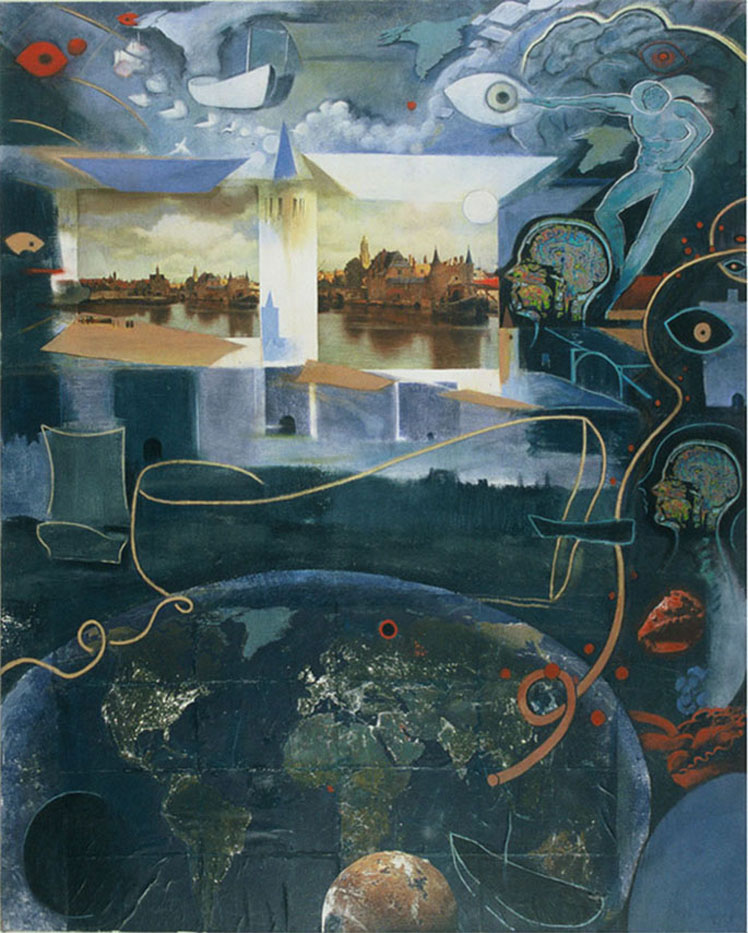 In Vermeer’s View of Delft, bodily enhancement result in subtle yet powerful feelings to produce intense satisfaction. Considered by some to be the finest landscape painting in all of Western art, the painting’s power makes it worthwhile to call attention to some of its effects that stem from bodily feelings.

In this collage painting, I combine Vermeer’s View of Delft, an image of the globe from National Geographic and Nilsson’s photograph of a human heart to explore the nature of existence. I emphasize a finite selection of particular images to emphasize spatial arrangements in which various entities develop a collective pattern while still retaining distinctive individual characteristics.

At first glance one may not notice the dramatically free and ambiguous handling of space and the boundaries of objects in the View of Delft. The geometric boundaries of building against building and building against sky are fairly definite. But there is much ambiguity within the textures and patterns of the masonry buildings, as well as in their intersection with the water. Upon closer inspection one sees the painting as a masterful artistic example of presenting both clear and vague sensations.  As Whitehead states, clear and vague sensations are required for depth of satisfaction. In his terms, clear and definite objects can take their place in the foreground and become referent to the breadth order of possibilities suggested in the vague background. Within the vagueness, a sense of connection and structured relationships to the clear objects is required. This condition is necessary for the immanence of relevant possibilities. Thus the body, with its ability to give to other images qualities of goodness, badness, balance, extension, and so forth, and that provides the ground underlying all symbolic reference, has developed with a mind that depends on the recognition of pattern to further its understanding of how contrasting entities can be connected and felt in togetherness.

Using Whitehead’s terms, I suggest that the View of Delft can be considered as one of the world’s finest demonstrations of the mind’s development toward the production of good within a finite unit of feeling. In his essay, Mathematics and the Good, Whitehead tells us how pattern plays its part in that up rush of feeling that is the awakening of infinitude to the finite activity of coming to closures of meaning, such as Clark’s reference to the View of Delft and its projection of “the light of the mind.”