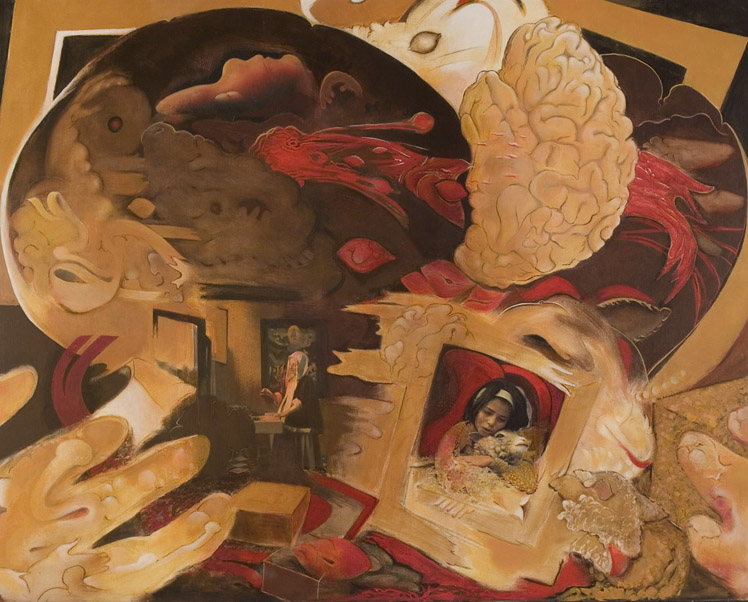 This collage painting  juxtaposes an image of Vermeer’s Woman Holding a Balance and a National Geographic photograph of a Peruvian girl cradling a sheep.  Both images project a sense of engaged connection, while also referencing distant moments of contemplation.

Whitehead brought feelings to the forefront of philosophy. He found all cognitive acts to be interactions of feelings and ideation. According to Whitehead, our initial awareness of a sculpture’s resemblance to dentists, tools, the sacramental light in Vermeer’s painting, and the Mickey Mouse ears, combine feelings and cognition into what he called “prehensions,” or acts of apperception.

Consider my prehension of an odor of gas when I awake in a darkened room in a cheap motel. In the case of the gas, by qualifying my initial prehension with prehensions of other features of the situation – that there is no flame, and what should I expect after checking into a motel with so many burned out letters on its neon sign? – I subdue my feeling of fear and breathe more easily while admonishing myself for being so stingy. This suggests that prehensions do not keep pre-harmonized contexts at bay but are dependent on them.

A baby perusing its mother’s face for smiles rather than frowns exemplifies prehensive processing directed by genetic programming. The complex neural process of mapping and evaluating unifications of prehensions including subliminal images has begun to be described by Gerald M. Edelman and other neuroscientists.  The issue as it relates to both our conscious, liminal and unconscious responses to the qualities and features of images is taken up in my presentation of Whitehead’s theory of prehension in Events and the Act of Perception.