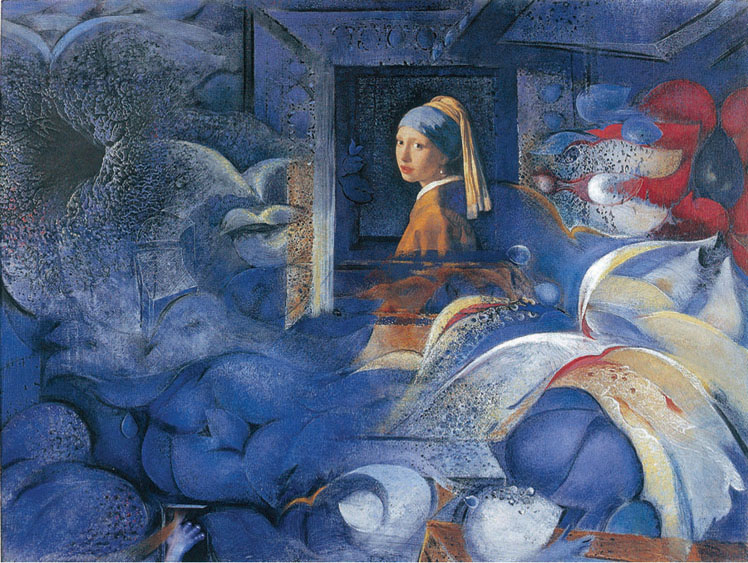 When I began work on The Evolution of a Mouth, I decided that references stemming from the mouth, eyes and turban would be prominent in the ground.  The first problem was to place the portrait within the canvas.  I devised a rectangular frame that partially surrounds the head.  This alludes to the heavy frames of Baroque painting, and acts to stabilize the head within the “shifting” ground.  I reiterated the frame shape in perspective, leading into the girl’s turning head and following her glance.  This gesture acknowledges spatial depth in the flattened portrait and responds to our bodily (implied strain feelings) and conceptual feelings (that she may be turning toward or away from the viewer) of her turn and glance.

Next, at the upper left, I placed a large photograph of an animal orifice made by an electron microscope.  I planned to modify this photo so that its forms would relate to the lips of the girl.  To reinforce this relationship, I drew lips that are more easily recognized emerging from the frame, directed toward the large orifice.  My purpose here was to present the two ends of a symbolic gamut – from the beautiful human lips, to me a sign of sentience and Eros, to the arresting primordial orifice of unknown scale – as if to say that out of this “organic” history suggested by the gamut of orifices, even if our individual associations may differ, has come the domains and associations of content that both males and females of many cultures will know as a beautiful feminine mouth.

To further associate the magnified orifice with creaturehood, I work a couple of roughly elliptical forms (which are latent eye and pearl shapes) into simplified “sheep-like creatures” with plaintive bleating mouths.  “Instructions” given by the suggestions of dividing cells in other parts of the collage enforce the idea of organic transformation and suggest the potentiality of recognizing the “eye-sheep” shapes.  Whitehead characterizes geometry as the science of intermediaries.  It is easier in a painting to design intermediary geometric forms pertaining to the shapes of the lips, eyes and pearls than it is to design forms reflecting the taboos and conflicts that are called up by the erotic sensuality and the retreat and advance of the adolescent girl.  By repeating shapes and textures, a gamut of lips can be suggested.
In calling attention to the functions of orifices opening and closing, in subjects ranging from flowers to humans, one touches on oral-genital functions that have largely remained unspeakable taboos in Western culture, at least until the modern interest in the subconscious.  Antonio Gaudi, whose architecture is, in my view, sometimes questionably associated with the irrationalities and subversions of surrealism, has shown in the windows of the Chapel of Colonia Guell, that references to the orifices of animals and plants can elicit feelings of joy, radiance and mystery.